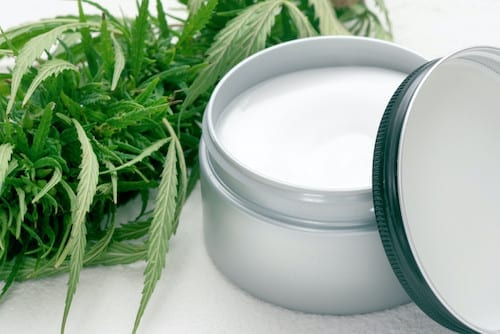 CBD skincare is being touted as a revolution in treating everything from anti-aging to acne. It is understandable that some people are skeptical of these claims. So is this true, or is it just clever marketing?

Here are some of the facts about CBD skincare that you should be clued in on.

What Exactly is CBD Oil?

CBD or cannabidiol can come from either the marijuana or hemp variety of the cannabis Sativa plant —  Of the two strains of the Cannabis sativa plant, Hemp is the preferred choice for CBD as Hemp has significantly lower levels of THC.  THC stands for tetrahydrocannabinol, which is the psychoactive ingredient in marijuana that is primarily responsible for the feeling of being “high,” which users experience when consuming marijuana.
CBD oil is generally mixed with a carrier oil that can be anything from coconut oil to olive oil or other types of oils. The two most common types of CBD are Full Spectrum and Broad Spectrum.  Full Spectrum contains the entire plant including THC, however, in order for Full Spectrum to be legally sold in the United States per the Farm Bill Act of 2018, it must contain less than .3% THC.

Broad Spectrum, on the other hand, is the entire Hemp Plant EXCEPT the THC is completely removed.  For this reason, Broad Spectrum is considered to be the best CBD available by many as you get all the benefits of the Cannabis plant without any of the negative psychoactive side effects of THC.   Additionally, you also have the peace of mind of knowing you will never fail a drug test screening for Cannabis.

It is also important to know that there is a major distinction between hemp seed oil and CBD oil, even though they are very often marketed as one and the same.  CBD oil is highly concentrated in cannabidiol, terpenes, and flavonoids, whereas hemp seed oil is made from only the seeds of the hemp plant which has no CBD, and no cannabinoids whatsoever.  In fact, Hemp seed oil has been sold in grocery stores for decades.

If you want to be certain that the CBD skincare you purchase or are looking to purchase contains CBD, look for cannabidiol on the list of ingredients.
Additionally, CBD isolate is another form of CBD however CBD isolate is essentially CBD with nothing else added to it. Some people prefer this, mainly because they know that there won’t be any other effects from other cannabis compounds however it is important to note that you will not receive any of the other important cannabinoids, terpenes of flavonoids when taking a CBD isolate.

Some supporters of Full Spectrum CBD are believers in what is known as the “entourage effect.” This effect is a term describing how the other compounds within cannabis plant work better together than by themselves.  Although this may or may not be true, one of the clear negatives of Full Spectrum CBD is you will be consuming THC.

There have been studies that show CBD isolate is less effective for promoting and supporting wellness, than using the whole extract of the plant.

How Exactly Does CBD Work?

Our bodies are an amazing thing — we can actually make a chemical that resembles some of the ones found in cannabis.
Anandamide is known as the bliss molecule.

This chemical elevates the amount of Endocannabinoid in our bodies. Having high levels of Anandamide present in the body can produce anti-inflammatory effects. It also stimulates other receptors within the body. What exactly these receptors are responsible for is still yet to be discovered.
Much of the media today has gravitated towards how CBD is able to control epilepsy.  The only FDA approved CBD product is Epidiolex, which is used for epilepsy, in particular, to limit or minimize seizures for those suffering from Epilepsy.

If you decide to consume CBD in your body using a supplement or CBD edible, it will enter the body through the bloodstream, much like a pharmaceutical. This will allow the CBD to start interacting with the Endocannabinoid receptors within the body.  The Endocannabinoid System is responsible for creating homeostasis or balance in the body.

On the other hand, if you apply CBD on the skin topically in a targeted manner it is only able to affect the area where it has been applied. It is believed that CBD that is stored in the body can provide relief over a longer period of time.

CBD oil can be used for a variety of functions. Its range of uses may help with both the wellness goals of the body, as well as supporting and promoting healthy skin. Some of the uses for the physical aspects are as follows.

The many studies of CBD oil show that it may be beneficial for anti-inflammatory purposes. So how does this work when caring for the skin?

CBD oil may have a calming effect on the skin, especially skin that is susceptible to acne. Acne stems from an inflammatory response, and research has shown that CBD may soothe this response, potentially lowering breakouts and redness.
CBD may also be able to lower the amount of oil production in the skin, which is another trigger for the appearance of acne. Studies, however, are still in their early stages, and more research is needed.
At the present time however CBD is not FDA approved to diagnose, cure, treat, or prevent any disease or skin condition.

Research is being done to test if CBD is also an antioxidant. This means is it able to lower the signs of skin aging. Although more research is needed, you are seeing CBD added to many different skincare lines.

Current antioxidants on the market may help to reduce the effects of damaged skin and excessive wrinkles. It should also be noted that CBD is most often a natural skincare ingredient when included in various products.

As mentioned above, CBD oil and its properties seem to be soothing for the skin. Many are using CBD topicals to address different issues related to having sensitive skin.

It is important to note that all types of skin can be affected by stressors in the environment. The soothing attributes of CBD oil may be able to keep the skin looking and feeling calm.  Although at this time it is not FDA approved for any skin ailment.

The Legality of CBD?

CBD oil and other products created from CBD are federally legal per the Farm Bill Act of 2018.  However, at the State level, individual states are implementing their own laws and interpretations so it is important that you check with your local municipality to find out the laws in your particular state.

In spite of this, there is an increase in beauty products that are made using CBD being sold around the United States and the world. Currently, there is only one drug-using CBD that has been approved by the FDA.

Known as Epidiolex, this drug has been used to help children with rare epilepsy types. Therefore, CBD brands that seek to be compliant with the regulation surrounding CBD have to work hard to make sure their marketing stays within the confines of the law.

While the FDA ruminates on the rules they think are correct for adding cannabinoids to edibles, there is more flexibility for experimentation within CBD topicals and skincare.

Used within the right parameters, CBD skincare may offer a host of benefits. Although there is more research to be done in order to find out exactly how it may help various conditions, the future for CBD skincare looks promising.

It is important to keep abreast of the regulations and ongoing research in the CBD field. This will provide visibility to the potential topical advantages of CBD oil.

Check out our range of fantastic CBD skincare and begin to reap the benefits yourself!

Welcome to The Wellest!! Sign up now for our newsletter and receive 10% off your first purchase! Dismiss